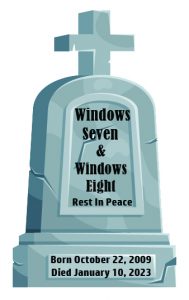 It’s the end of the line for Windows 7 and Windows 8. Microsoft’s support for these two operating systems just ended on, January 10, 2023. Surprisingly, Windows 7 still operates on more than 11 percent of desktop computers worldwide. Windows 8, which no one ever liked, still runs on 2.59 percent of all computers.

Microsoft suggests Windows 7 users get a new PC because computers have changed greatly since Windows 7 was first released ten years ago and says new computers are much faster and more powerful and come with Windows 11 already installed.

If, for whatever reason, you decide to keep using your Windows 7 computer, you should at least upgrade it to Windows 10. Most Windows 7 PCs just don’t meet the hardware requirements to upgrade to Windows 11.

If you don’t upgrade, or replace, your Windows 7 computer, and you are using it on the Internet, it will fill with malware, and as there are no more Microsoft updates being released, it will soon be way more trouble than it’s worth to keep Windows 7 operating.

Support for Windows 10 ends on October 14, 2025 so there is still almost three years to use Windows 10 before you will be forced to upgrade to Windows 11.

It’s time to make a decision concerning Windows 7 and Windows 8. You’ll definitely have a lot less PC problems if you change to Windows 10 or 11. Out with the old and all of that stuff.